I also found that by taking individual shots of the elements making up any particular decor I could gradually built my own photo library of Bunches, Arches, Table Decor, Ceiling Scatter and other numerous pieces of Classic Décor.

Towards the end of last Century I discovered CorelDRAW and it’s integrated package partner PhotoPAINT. Their similar user-friendly interface made it convenient to intuitively become acquainted with the two programs while working on either. Suddenly the world of computer graphics, photo enhancement, desktop publishing and digital presentation were all part of my now very flexible marketing plan. The presentation of our work was taken to a new level when we were able to make one photo become two or seamlessly blend two into one, add effects, include or portions from another photos. With little effort and a lot of curiosity I was soon amazed at how quickly I was able to teach myself the several simple steps it takes to create impressive presentations. Within minutes I could transform an empty venue into a magical room full of bunches, sculptures, arches and table décor, I was able to present our best selling items from previous functions in different venues, I was even able to used the same bunch and re-colour the balloons … all this without inflating any additional balloons … The preparation time and cost of my marketing campaigns were now dramatically reduced. Overnight I found a new versatility in my promotions. And it was all done by untrained me and not some high priced graphic artist who did not understand the balloon industry. With a little effort you can do it as well … If not better.

GETTING TO KNOW THE INTERFACE 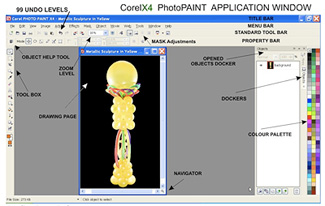 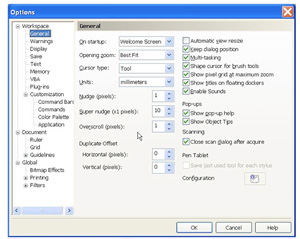 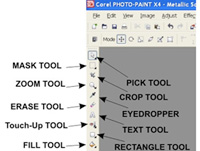 Tools and How to Use Them:

Found along the Toolbox the Tools with the small triangle in the bottom right corner allow it to ‘flyout’ as shown by the examples shown in the Diagram. The Flyout Tools can be positioned anywhere within the Application Window ready for easy access. Fly-outs display similar Tools Eg: the Mask Tool and it’s various versions

Example of how to clean up a photo of unwanted background to
make customised Clipart and inserting it into a new photo.
For simplicity in demonstration the example below is shown using a photo with a plain back background For a photo where the required décor is shown in a ‘live location’ additional tools such as Erase may be used to clean up the unwanted area.  It is important to note that with a program as powerful and versatile as Corel there a several ways to achieve the same result, experimentation will lead you to the one which best suits your needs.

Select (on the Menu Bar) Image > Crop > Crop To Mask
This will reduce the overall size of the picture to the limits of the objects boundaries.

Now that you have the desired Sculpture/Bunch (or other object) with no background it can be saved as a Corel PhotoPaint file (CPT) under what ever name you require and used as an original piece of Clipart. File > Save As Type >  CPT-Corel PHOTO-PAINT Image

USING THE SAVED IMAGE TO MAKE A NEW PICTURE
You will notice that I am also using a clipart Bunch Of Balloons that had been cleaned up using the same process described in the previous Five Steps. The Bunch was actually inflated and put in front of a plain wall and photographed before I delivered it to a client, thus making it easy to clean a delete the background. 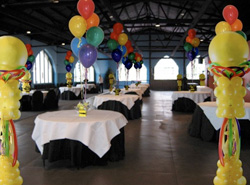 FIGURE SIX:
In Corel PhotoPAINT I opened a photo of an empty venue. Select (on the Menu Bar) File > Open > The desired File

FIGURE SEVEN: Ctrl I
Select (on the Menu Bar) File > Import  > The desired File
I then placed the Sculpture in the position I required on the photo

FIGURE EIGHT: Ctrl C > Ctrl V
I selected the original image and copied and pasted it seven times. I reduced several of the Sculptures and placed them around the photo to represent the Sculpture actually being in the room.

FIGURE NINE: Ctrl I
Select (on the Menu Bar) File > Import  > The desired File
As in Figure Seven I imported a file, this time my Clipart Bunch. I then reduced the size of the Bunch and positioned it on a table.

FIGURE NINE: (B) Ctrl C > Ctrl V
I copied and pasted the bunch eight more times and reduced/placed them around the room on the tables to finish the décor.
As you can see the basic steps are relatively simple. The results is stunningly impressive and transformed the empty venue into a colourful party room.