Posted in: Feature Articles, Issue #10 0
Launched in November 2000,  the National Adoption Day Coalition worked with law firms, state foster care agencies, child advocates and courts to complete hundreds of adoptions from foster care in nine jurisdictions nationwide.
Today National Adoption Day is celebrated nationwide on the Saturday before Thanksgiving as hundreds of events are held to finalize the adoptions of children in foster care, and to celebrate all families who adopt. It’s one day each year that courts, communities and families set aside to celebrate families formed through adoption, finalize adoptions and raise awareness of the more than 100,000 children in foster care waiting for loving, permanent homes. In most cases, the staff time is volunteered and the judges also offer their services at no cost.
My involvement began 15 years ago when I was approached by one of their benefactors who wanted to provide helium balloon bouquets around the courthouse.  I remember having to rent a truck from U-Haul to transport them all because they wouldn’t allow tanks into the courthouse.
Over the years, there have been helium shortages and personnel changes that affected the way we decorate.  We are now permitted to bring tanks and equipment in and they even allowed me in the night before to get a head start on some of the air filled décor.  I still arrive back at the courthouse at 5 a.m. with my crew to complete the job which has to be done by 7 a.m.
It’s all about building rapport and establishing trust.  I have been given free reign pretty much to decorate as I wish keeping within their budget. In recent years I have begun using themes such as this year’s “Cute as a Bug” or last year’s safari animal theme.  When I reached out to them to see if they would allow me the privilege to decorate again this year, the return email said “Not only do we have you down, but are very excited to see the great creations continue!”. 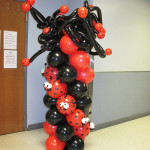 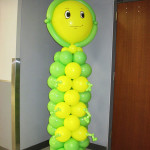 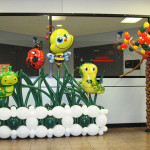 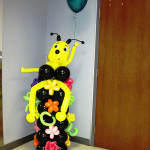 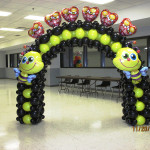