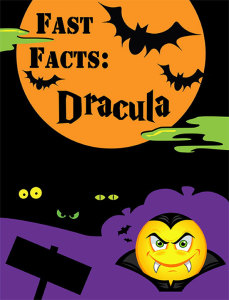 Few characters have captured our imagination more than Dracula. Since he was first introduced by Bram Stoker during the late 1800’s, we can’t get enough of the hemovore and, more than a hundred years later, dressing up as Dracula for Halloween still tops the most popular Halloween costume lists.

Customers love facts and figures. Why not dress up your shop with these fast facts on bold display.

Chip Wagar is an authority on Eastern Europe and the Balkans.  He has a Bachelor of Arts in International Affairs with a concentration in Eastern Europe and the (then) Soviet Union from George Washington University, and spent a year studying abroad at the Austro-American Institute in Vienna. His first novel, An American in Vienna, was published in 2011. He lives and practices law in New Orleans, LA.