Bangkok – Thousands of smiley-faced balloons were released into the skies above Bangkok as inviting symbols of friendship to entice travellers from around the world to visit the kingdom. This spectacular and memorable event took place on the first day of the Thailand Happiness: Street Festival extravaganza in Bangkok, which was held 25-26 July. 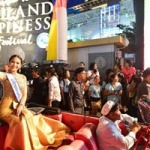 Happiness Music and Parades. No street festival is complete without vibrant music and colourful parades. Throughout the two-day event, famous Thai artists performed up and down the streets to put smiles on the faces of the crowds with fun songs, special effects, sound and light shows. 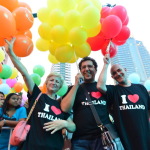 Foreigners take part in releasing smiley balloons Visitors to Thailand from around the world joined the fun and helped to take part in the great balloon release. 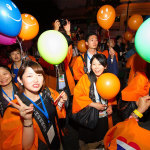 Happy People enjoying Happiness Street. Thai and international travellers enjoyed the fun activities of the city’s new Happiness Street that for two days was Bangkok’s beating heart. From Parc Paragon on Rama I Road to Ratchaprasong Square on Ratchadamri Road, stalls and shops sold refreshing drinks and funky fashion to the delighted crowds. 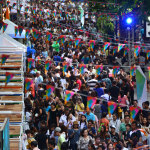 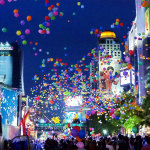 SEARCH Event Recap
One Party to Rule Them All: H&P Expo, PPR to Combine Forces on Kick-­‐Off Event